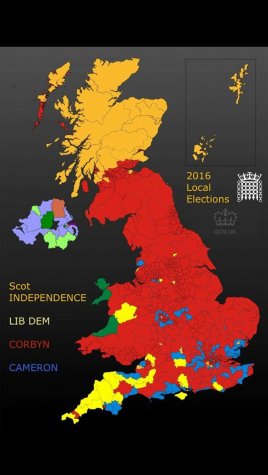 I’m not going to debate whether or not this was a vindication of Corbyn’s leadership as there are plenty of people doing that already. But I am going to comment on this truly woeful, misleading and not fit for purpose graphic.

So what is wrong with it?

First I will start with the most important the map is actually wrong! There are many councils that did not have elections, for example these four in Lincolnshire: Boston, South Holland,  West Lindsey and North Kesteven. All four are Conservative controlled but they are shown as red on the map (look at the East Coast under the River Humber).  I suspect there are more factual inaccuracies in this graphic. I’ve not checked all the council results but what I’ve identifed alone disqualifies this graphic, and it should be binned.

Second, all the graphic shows is the land mass of the UK controlled by political parties. That is a meaningless metric in this political debate as some council areas have a small number of voters but a large land mass, and vice versa. What we want is either an idea of votes cast or number of councils controlled. A table or graph would be far better.

Third, this gives no idea whatsoever of votes cast or number of councils controlled.

Whoever produced this graphic did a terrible job. It is factually inaccurate, misleading and the wrong graphic was chosen. It does our political discourse no good when such shoddy graphics are produced.

Edited to add: I now realise where this came from – it was a spoof from spoof reporter Jonathon Pie that has now become “the truth” and is circulating on social media. Which I guess shows how easily social media can make an unsourced graphic gain currency.

Edited a second time to add – the tweet from Jonathon Pie has now been deleted – see below. I should have taken a screenshot at the time. I’m now drawing the conclusion it was not a spoof but intended as a true representation, otherwise why delete it? Below is a screen shot of the retweet I did of the original Jonathon Pie tweet – now deleted.